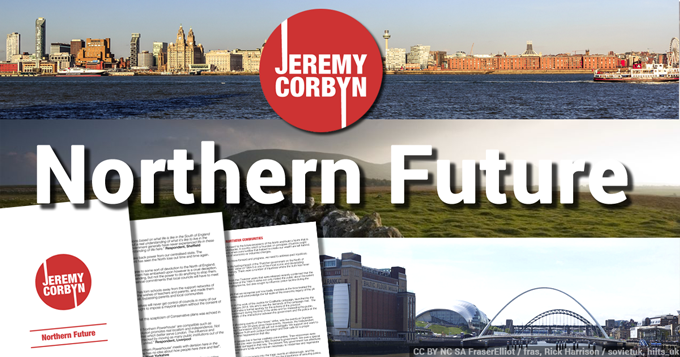 They propose a fundamental shift in the base of the economy under his Labour government with new and urgently needed programmes to build affordable housing, the creation of high-skilled jobs and apprenticeships, innovative methods of tackling climate change and a new approach to foreign policy based on peace and social justice.Mr Corbyn received over 1,200 contributions from Labour supporters in the North of England ahead of a new campaign paper entitled ‘Northern Future’. The paper will be launched in Leeds on Tuesday 4th August and includes quotes from respondents alongside the Labour candidate’s approach to a range of issues affecting northern economies.

In ‘Northern Future’ Mr Corbyn attacks the unfair funding of the arts and policies that have deliberately led to the decline of UK manufacturing. He calls for the rebalancing of transport investment towards the North of England.

In the paper Mr Corbyn argues that Local Enterprise Partnerships cannot adequately rebalance the economy because they are too controlled by the Treasury and ‘lack the scope, capacity and scale to tackle these problems free from central government diktat’. Instead Jeremy Corbyn calls for the reindustrialisation of the UK and believes that the North of England has the right ingredients to benefit most:‘It is in the long term interest of the UK to rebuild a resilient industrial base and with its people, energy, land and water, the North of England is the place to lead this.’While recognising the importance of cities, Mr Corbyn calls for greater attention to be given to the economic needs and contribution of towns and rural areas of the north. His paper makes the case for prioritising superfast broadband as well as ensuring fully funded bus serves with greater local control.The Labour leadership candidate is scathing of minister’s plans to insist on elected mayors without referenda and instead calls for an inclusive constitutional convention that can discuss the alternatives. Mr Corbyn argues that the Conservative government’s plans for devolution are ‘a cruel deception’ because they will be accompanied by large-scale cuts. He argues for far greater investment and designed in a way that will play to the region’s strengths. Mr Corbyn paper says: ‘we will need new investment institutions, rooted in the Northern economy to ensure deep rooted regeneration.’The Labour leadership candidate says the Northern Future document is an example of a leadership style that engages and involves party members and that this approach it would continue if elected leader next month. Jeremy Corbyn said:“I was delighted to see the volume and detail of responses from the Labour Party members on the hugely important issue of growing our northern economies. The Northern Future paper includes my own ideas to show the direction I want to take as leader, along with a sample of the 1200 excellent contributions we received. There is a lack of faith in the Conservative’s Northern powerhouse agenda which combines powercuts for rail electrification with the devolution of crude cuts. Despite this, the need for reindustrialising the north of England and providing the investment and freedom to innovate and prioritise has never been stronger. There is an appetite for a real alternative and this important conversation has begun.”