Labour leadership candidate, Jeremy Corbyn MP, will this morning outline his vision for a modern, more productive, fairer economy for all.He will lay out plans to build a rebalanced, prosperity-focused economy, based on growth and high quality jobs, at a policy seminar with an audience of economists, academics and trade unionists in central London. 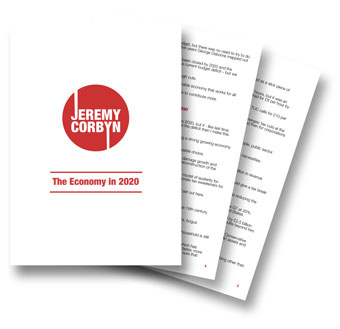 He will place a strong emphasis on the need for tax justice and the importance of bearing down on tax avoidance and evasion.He will call for the establishment of an National Investment Bank to promote infrastructure upgrades and support for innovation. And he will publish a policy document revealing why the direction of the British economy under the austerity measures of George Osborne will fail to tackle the budget deficit and fail to restore Britain to a fairer nation. The publication of Jeremy Corbyn’s plans for the economy provide further evidence of the serious nature of the policy debate Jeremy is bringing to this leadership contest.He will continue rolling out his ideas on the urgency of economic prosperity measures for all of Britain in the coming weeks.“Labour will close the deficit through building a strong, growing economy that works for all, not by increasing poverty,” he will argue today.“Austerity is a political choice not an economic necessity. There is money available – after all, the government has just given tax breaks to the richest 4% of households.“Where there are tough choices, we will always protect public services and support for the most vulnerable.“But in an economy that works for all, we will be able to ask those with income and wealth to spare to contribute a little more.“You just cannot cut your way to prosperity so Britain needs a publicly-led expansion and reconstruction of the economy, with a big rise in investment levels.“Under these plans Labour 2020 will make large reductions in the £93 billion of corporate tax relief and subsidies.“These funds can be used to establish a National Investment Bank to head a multi-billion pound programme of infrastructure upgrades and support for high-tech and innovative industries.“Talk of the ‘Northern Powerhouse’ is largely southern hot air. The pain of the cuts has been devolved, but power and prosperity remain tightly centralised.“We must ensure that our national housing, transport, digital and energy networks are among the best in the world.”On taxation and tax justice, Jeremy will argue:“Under these plans outlined today Labour 2020 will make the tax system more progressive, and follow a five-point plan to tackle tax avoidance and evasion:

“We must ensure that those with the most, pay the most, not just in monetary terms but proportionally too.”